At the Crossroads: An Introduction to Sefer Shmuel 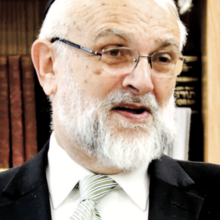 Rabbi Sosevsky grew up in Brooklyn. He attended the famous RJJ Yeshiva from High School through Semicha, and subsequently gave a post high school english language Gemara Shiur there for 3 years.

While learning in Kollel at RJJ in the mornings, he received permission from Rabbi Joseph B. Soloveichik to sit in on his afternoon shiurim for 2 years. He ultimately became the first maggid shiur at Yeshiva Ohr Torah in Riverdale, where he helped develop some truly outstanding Talmidei Chachamim. He simultaneously served as founding Rabbi of Cong. Shomrei Emunah of Englewood New Jersey.

Rabbi Sosevsky and family made Aliyah in 1980 at which time he founded the initial stage of Yeshivat Ohr Yerushalayim. In 1984, he and Rabbi Shmuel Wagner joined to develop the Yeshiva into its present stage as one of the first post high school programs in Israel, one which has greatly effected Torah Education, both in Israel and America.

Rabbi Sosevsky's goals for the Yeshiva both then and now, is to provide high level Torah learning that will inspire students to a lifetime of Torah endeavor.

Rabbi Sosevsky has an M.A. and M.S. in Education and Psychology and a doctoral degree from Ferkauf Graduate School of Yeshiva University.

Rabbi Sosevsky served as founding editor of "Jewish Thought": A Journal of Torah Scholarship, published co jointly with the Orthodox Union (1990-2001). He edited "the Book of Jewish Thought: Essays on the Yomim Tovim" (1996) O.U.

He produced the "Shmuel II Book of the Prophet" of the Judaica Press series on Nach.

He has published numerous articles in various journals, including "Tradition", "Jewish Action", "Kolmos", "Jewish Education", and his own "Jewish Thought".

Enhance your Rosh Hashanah with this introduction to Sefer Shmuel.

Join Rabbi Sosevsky as he uncovers the mystery around Elkanah, Hannah's husband.

INTRODUCTION
01:42
LET'S LEARN TOGETHER
36:18
We suggest moving this party over to a full size window.
You'll enjoy it way more.
Close
Go Fullscreen